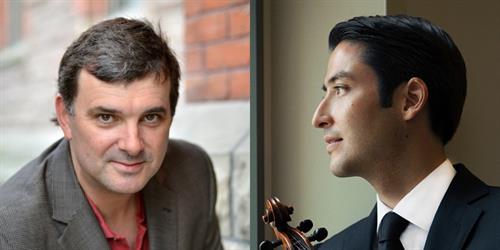 Grammy Award-winning Japanese-Norwegian violist Masumi Per Rostad has been described as an “electrifying, poetic and sensitive musician” with an “understated yet commanding presence” by critics and is in demand as a soloist, chamber musician, and teacher as well as an active contributor to many online and print publications. While studying at the Julliard School he was awarded the ‘Lillian Fuchs Award’ for outstanding graduating violist. He also won The Juilliard School Concerto Competition and performed the world premiere of Michael White’s Viola Concerto in Lincoln Center’s Avery Fisher Hall, with conductor James DePreist.

Cellist Andrés Díaz has exhilarated both critics and audiences with his intense and charismatic performances. He has earned exceptional reviews for his “strongly personal interpretive vision” (The New York Times) and his “bold and imaginative” playing (The Boston Globe) and was awarded the prestigious Avery Fisher Career Grant as well as a generous grant from the Susan W. Rose Fund for Music in 1998. His appearances at the Tanglewood festival earned him the Pierre Mayer Memorial Award for Outstanding String Player and in 2009 was nominated for a Latin Grammy.

Unable to make this our final concert of the summer? We have plenty more events through June and July. Click here for more information!